Tonight I had the privilege of attending a FB live discussion and I must say it was quite interesting and I had a lot of fun with the hosts. 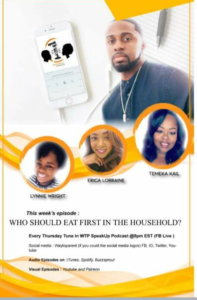 The live was hosted by Speak up Podcast that airs every Thursday you can check them out at https://www.waytoparent.com/ or follow on Facebook at https://www.facebook.com/WayToParent

The topic of discussion was “Who eats first in the household?” Now you know my little self was just itching to get all up in this conversation. I for one have issues with the idea that this is even a discussion, But we do live in a society where expectations of what the role of a woman and man are are extremely exaggerated.

In primitive times it was indeed expected that the woman serves the man, I mean let’s face it there was a time when women did not work, women were expected to stay at home take care of the children clean house and prepare meals for their spouse and cater to him after a long days work. And hey I guess if all she does is stay home and do nothing(insert sarcasm) then, of course, she should be at his beck and call. Even a damn near 100 years later there is still this mindset that women are supposed to make their partner’s plate and still cater to him.

However, in today’s world, there are many women working full-time jobs, going to school, taking care of kids and pursuing dreams. Both men and women are working yet, there is still this unspoken cardinal rule that women even while doing all that I stated above are still required to do for her man as if he can’t do for himself. But why? Why is this still an issue?

I for one do not believe that women are SUPPOSED to do anything, that there should not be an EXPECTATION that she will cook for him and make his plate after a long ass day of work. It’s not being a feminist it’s being logical and fair. But of course, the world isn’t fair. If both the man and woman work why can’t there be an understanding that both are capable of cooking and both are capable of fixing their own plate? There is nothing wrong with fixing your own plate.

If I am involved with someone I’m not saying that I would never fix his plate but what I am getting at is if he expects it then no I won’t do it. Because that expectation does not give me the freedom to willing want to fix his plate it instead puts me in a box and deems me a prisoner to obligation. Why would a man want me to do anything out of obligation instead of want and genuine love? There are so many women burnt out from working, taking care of home and children and catering to their man while he comes home from work sits on the couch and does nothing. He walks in the kitchen and sees she has cooked and doesn’t even offer to wash the dishes.

This is what concerns me that the weight of the household is carried by the woman instead of being balanced by both parties involved. Now don’t mistake it if I’m going to talk about how there shouldn’t be an expectation from men to women I also have to be fair and also state there shouldn’t be an expectation from women to men. Hell everyone was single before they ever got involved with anyone so then how did your food gets cooked, how did your clothes get washed? How did your plate get fixed, how did your gas get pumped? How did your oil gets changed, if something broke in your house how did you fix it? You did it yourself or you paid someone to do it because truth be told if you didn’t it wouldn’t get done.

So why the hell do we get involved with people and then all of a sudden start EXPECTING shit? We are focused on the wrong things. The expectation is the belief that someone will or should achieve/do something. Our expectation is frivolous. My concern would not be whether or not a plate is fixed but rather can you be faithful, can you be committed, if I’m unable to do anything for whatever reason can you see it observe it and do your part? I stated this in the discussion and that is that every situation and relationship is different. If you are in one and cook for your man every day and fix his plate do you but don’t look over at me and look down at me because I choose not to in my relationship.

Nobody discusses this stuff when they are courting and leading down the path of getting serious. If you know you are a woman who doesn’t always like to cook why wouldn’t you make sure that the man you are going to be with would be okay with you not always doing it. And if you are a man that is looking for a woman to cook and fix your plate then that’s something you should be finding out from the beginning. If you are a clean freak why would you get with someone who isn’t clean? It’s simple.

Let’s talk about me for a minute I do not even like cooking for myself and I know how to cook, some days I come home and make a PBJ sandwich because that’s all I have the energy to do or ill buy take out and be good. My daughters know if they are hungry they have the capability to go in that kitchen and prepare themselves some food, they know mommy isn’t thinking about them when I get home from work. I made sure they know how to do what needs to be done to be sustained. So if in my singleness I operate like this why on Earth would I allow myself to get involved with someone who would expect me to do something I don’t even do for myself? Where they do that at?

And the question was asked am I single and I strongly said YES! because I know my likes and dislikes and so in knowing that why would I subject myself to be with just anyone for the sake of just being with someone. Velma Alecia Mack ain’t slaving over no stove. Period! Velma Alecia Mack ain’t fixing no plate if I don’t want to. If I do it he will indeed know it’s because I want to and not because I have to. But then again I’m a different breed and hey I’m okay with that. I promise y’all singleness is a freaking blessing!!!!!!!!!!!!!!!